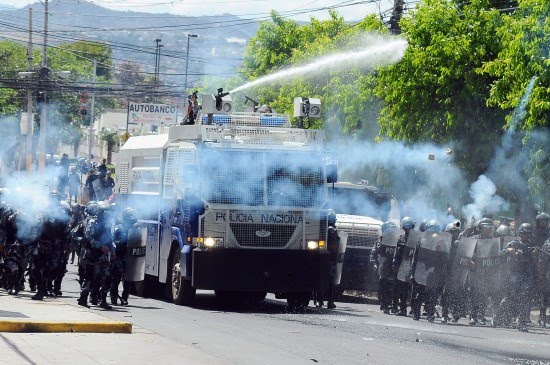 This is the news from Honduras after a week of protests against the Lobo regime’s human rights violations, attacks against the unions, and plans to privatize education and public services. The army and police have forcibly occupied the National University and repeatedly assaulted the offices of the teachers’ unions. Peaceful protest marches have been violently attacked; many hundreds of tear gas bombs have been fired; one teacher has been killed in the protests, and many persons detained.  At the same time the harassment and paramilitary threats against the peasant and indigenous communities in the countryside continue unchecked and with total impunity.

While almost every day Human Rights organizations issue urgent alerts for Honduras, the U.S. government is moving forward with its plans to “normalize” Honduras’ position in the international community and is trying to get Honduras reinstated in the Organization of American States (OAS); it was expelled after the military coup in June 2009. Furthermore, the U.S. has scheduled millions of dollars in aid to the illegitimate regime of Porfirio Lobo: $1.7 million dollars in direct aid to the military and an estimated $4.6 million in aid to the police and other security forces.

Since Lobo took power in January 2010, through elections that were not recognized by most international human rights groups and observers organizations such as the Carter Center, there have been as many as 36 political murders, according to the Center for Constitutional Rights, these murders include teachers, peasants, members of anti-coup resistance groups and 8 journalists, and 14 members of the LGBT community.

Stand in solidarity with the March 30th civic strike called by the resistance organizations, unions, and student groups in Honduras.

Tell them of your concern for the human rights crises in Honduras and your demand to cut off aid to the Lobo regime and end efforts to reinstate Honduras in the OAS.