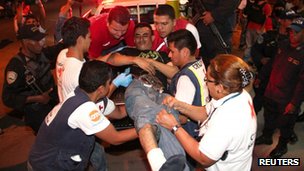 Officials in Honduras say inmates have taken control of a prison in the city of San Pedro Sula.

At least one person was killed and 10 injured when prisoners opened fire on each other on Wednesday.

The prison governor said guards had surrounded the jail but he had ordered them not to go in to “avoid a bloodbath”.

Honduran prisons are notorious for overcrowding, rioting and violence; 13 inmates died in the same jail in March.

Officials said a fight broke out on Wednesday in the block housing inmates not aligned with gangs.

Prison Governor Orlando Leiva said the motive could have been a fight about a woman.

“We have not yet been able to confirm that report because the women who were in the prison are still being held by the prisoners,” Mr Leiva said.

The governor said that when the shooting started, the guards followed security protocols, opening the cell doors and securing the prison’s perimeter.

Thirty patrols are stationed around the jail to prevent convicts from escaping.

The Bishop of San Pedro Sula, Romulo Emiliani, is negotiating with the inmates in an attempt to reach a peaceful outcome to the stand-off.

Honduras, which has the world’s highest murder rate and a huge gang problem, struggles to house its inmates.

In February, a fire in a jail in Comayagua, north of the capital Tegucigalpa, killed 361 people.

Posted On February 16, 2011
US State Department official: “After this tour, if we find we have a shared perspective in the region, we hope it will allow us to develop a new structure which could develop more collaboration between countries in the Mesoamerican region, as well as other countries in the hemisphere that offer their support and participation"

Posted On November 24, 2010
Hundreds of protesters opposed to a mine of Southern Copper smashed windows at a training center and set a bus on fire on Monday, witnesses said in the latest conflict over natural resources in Peru.

Posted On September 22, 2010
Latino Veterans present about the multiple wars affecting our families and our towns: the wars abroad that they fought in, the wars on immigrants where they are targets & the war on the poor to cut needed services.