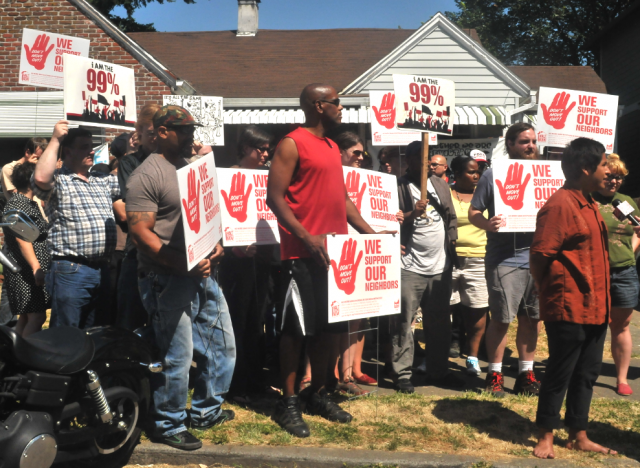 Story and Photo By Pete Shaw

Nearly 75 members of Portland’s Rapid Response Network (RRN) assembled outside Alicia Jackson’s home at noon today, within ten minutes of receiving a text message calling for their assistance. “The cops were acting fools in the front and backyard,” said Lobo, co-founder of the Blazing Arrow Organization (BAO). “We were afraid they were going to come in here (Jackson’s house). We put out the call to protect Alicia and her house.”

The quick action of the RRN, many of whose members had arrived nearly 12 hours earlier when police descended upon the duplex that was claimed for a community center yesterday, apparently kept police from seizing Jackson’s property. During the early morning raid, Dir’k Zizka, an activist with the BAO and We Are Oregon, was arrested and charged with trespass and burglary. But according to Lobo, “Nobody was living in this duplex since it was built, because nobody has wanted to move onto land that has been stolen from the original resident. The burglary charge will not hold up in court because they have absolutely no evidence that the person who was arrested stole anything, or that they were planning to commit a crime.”

Taran Connelly, an organizer with the Portland Liberation Organizing Council added “After Alicia was illegally evicted last fall, a developer built a condo on her lawn. What’s happening with Mr. Zizka is a scapegoating of one person who took a stand for community control of community resources yesterday when that condo was turned into a community center. Mayor Sam Adams and his police are doing the bidding of the big banks right now, in full contradiction to his cheerleading of the occupy movement last fall.”

On November, 10, 2011, Mayor Adams said in his statement regarding the eviction of Occupy Portland, “It is my sincere hope that the movement, with its focus on widespread economic inequity, will flourish in its next phase—a phase where we can focus all of our energies on economic and social justice, not on port-a-potties and tents. I believe Occupy Portland can lead the nation in this next phase of the Occupy Movement, and I personally look forward to working with participants toward their broader goals.”

What support this land liberation movement lacks from the 1%, their politicians and their police bureau enforcers is more than compensated for by many within the community. Throughout Northeast Portland there are hundreds of lawn signs expressing support for those fighting foreclosure by refusing to leave their homes. As members of the RRN conferred in groups, a man drove by and stopped to comment.“They’re just scooping them all up,” he said, in reference to the duplex on Jackson’s property. “You’re doing the right thing. I appreciate it so much. Keep doing what you got to do.”

When asked about the police presence on her property, Alicia Jackson chose to emphasize the bigger picture. “Capitalists have been stealing from black and brown people for centuries. When we want back what is ours, only then is it called criminal. This is not burglary. We’re taking back what was stolen from us. We’re doing what’s right. It’s the banks that did the stealing.”

“They’re framing this from the typical point of view that the developer is a victim.” said Ahjamu Umi, of the Black Working Group and the Portland Liberation Organizing Council. “He’s not. He’s made his money flipping houses, profiting from people’s misery. Alicia and the community are fighting back.”

Lobo believes the Portland Police did the RRN a favor and sees it as part of a learning process. “We are learning to anticipate their moves. If they decide to initiate violence, we will be ready to respond.” Using Zizka as an example, Lobo acknowledged the challenges faced by those who agree with Ahjamu and Jackson, that the real crime comes in denying humans a right to shelter. “But it’s better to take a risk and get everything than take no risk and get kicked out of the neighborhood.”

To join the Rapid Response Network, text @ploc-openrrn to the number 23559