It’s been nearly a year since I left for Honduras to take part in a
human rights delegation to support the Hondurans in their resistance.
It was an amazing experience and I am so thankful for the love and
support that made my trip possible. I returned to Portland in late
February and am writing to tell you about the groups I have been
working with and ask for your support on a new project.

This June myself and three other Portland activists are going to
Honduras as a solidarity delegation to mark the second anniversary of
the coup de ta on June 28th 2009. The purpose of this delegation is to
strengthen ties within the resistance, denounce the violent repression
from the state, and report back to our communities. Please help this
important work by making a tax deductible donation to Education
Without Boarders. Let me tell you about the communities we will be
working with.

I went to Honduras because I had been inspired by the stories of the
resistance. The corporate control of our political system is mirrored
in the corrupt and broken system in Honduras. We are all affected by
the global ecological, economic and political crisis, but the impact
of these crisis is crushing the poor people of the world.

One of the first people I met in Honduras was Felix Armalina. He is
the host of a nightly radio program “La Voz de la Resistencia” (the
voice of the resistance) aired across much of Honduras. He talks about
staggering obsticels in Honduras and challenges that continue to
confront the people, “The government has no money to provide basic
social services and the cost of public services like water and
electricity are becoming more and more expensive. The stated national
debt is over a billion dollars and  the coup government of Pepe Lobo
is involved in the mass privation of the country.  Homicides are up
and organized crime is on the rise. Only two out of every 100
homicides is prosecuted. There is an increased military presence in
public institutions namely the public telephone company was turned
over to coup conspirator Jose Valazquez Valazquez. People face ongoing
human rights violations and in 2010 Honduras was the most dangerous
country in the world for journalists. In just four months last year
eight journalists were killed.  But the people continue to resist!!”
Felix knows first hand effects of  repression by his government.
During the first months of the coup the military tried to silence the
voice of the resitance by raiding and shuting down his program on
multiple ocassions.

We met with Chris Loperena a social anthropologist from the U.S. who
first came to Honduras in 2003. In 2005 he began working with
OFRANEH-Honduran Black Fraternal Organization of the Garifuna people,
who are an internationally recognized indigenous population. Because
of this status they are allowed special rights and protections for
their valuable Cariabian Coastal lands. The Garifuna are fighting the
threat that tourism places on their traditional communities. Honduras
has a national sustainable tourism strategy that was developed by the
World Bank and the International Development Bank. This stategy has
targeted the Garifunas lands around Tela bay to be developed into a
major resort destination. The land that has provided the Garifuna
people their livelihoods for hundreds of years is slated to be turned
into a golf course, and a Marriott resort.

Already multinationals and the Honduran government have dumped over
300 million dollars into this project. The culture and community of
the Gariffuna, their native dance and music are being exploited by the
tourism industry. While racism is masked by various excuses to not
hire them for the work they had been promised.

We also met with COPINH the Civic Council of Popular and Indigenous
Organizations of Honduras. In 1993 COPINH helped win 200 collective
land titles for the Lenca the indigenous people of South West
Honduras. Legislation passed in late the 90’s by the Honduran
government allowed indigenous land to be re-sold against international
laws. Through this illegal judicial process and the hiering of
para-military to murder and intimidatie the Lenca the largest land
owner in Honduras Miguel Facusse has used intimidation and murder to
coerce the Lence into selling 28 of their co-ops. Despite the constant
violent harassment COPINH members remain on the forefront acting for
radical change in the refounding of their country. They model
alternatives, stand up to the government, and fight multinational
corporations.

Another important community and example of resistance to the campaigns
of fear is the community of Zacate Grande. Most poor, campesino
families on the Zacate Grande peninsula have lived there for at least
four generations. National laws had prohibited private titling of
beach front lands. The 1994 Land Modernization Law passed allowing
private titling, but before the residents knew what had happened,
Miguel Facusse and his associates gained dubious titles through
irregular means. Facusse uses intimidation, threats and bribery to
split the community while government troops regularly attempt to evict
them from the land. Nevertheless, Zacate Grande lends its strength to
La Frente.

As we look for hope and examples for the future we can look to the
strength of message and commitment to real change in the work of
COPINH, OFRANEH, and Zacate Grande. The roots of their struggle is
based in a long tradition of defence of our natural world “pacha mama”
and the rights of indigenous people. In the words of the Lenca :

“Given the continued sale of our country and all its natural assets,
such as water, metal and mining resources, land, territory, beaches,
oxygen, forests, ancient native seeds and intellectual property of
indigenous peoples, blacks and the Honduran people in general- We warn
the local oligarchy and the multinationals, which deepen our
historical strength in defense of life and mother earth and in our
vision of development is fundamental spiritual value of life in
harmony with nature, ie respect to mother earth, so that we will under
no circumstances allow the promoters of greed, destruction and death.”

What do these stories have in common? All three of these inspirational
communities use radio as a form of resistance, through education,
organization and mobilization. OFRANEH, COPINH, and Zacate Grande each
have stations that use a democratic community process and popular
education to inform the people about the neo-liberal agenda and to
denounce injustices.  Sadly, all of these vital community radios have
been targets of repression over the past two years and all but one
have been destroyed or shut down in the past year.

Inspiration can be found daily in commitment of the Honduran people to
the long path of justice. One thing that continues to sustain me, is
the high value placed on humility in indigenous and campasino culture.
What gives the resistance it’s deep power is people have not only set
aside their differences, they commit to learning about and fighting
for each other’s struggles and to standing together in solidarity. The
resistance is not just the campasinos or the students or teachers or
professionals or indigenous or the gay community. It is everyone
working together for the refounding of their country. They fight the
fatigue and apathy that comes from a long drawn out battle. They fight
co-opption and betrayal from leadership. They fight a media blackout
and divisive disinformation campaigns. They fight violence and
terrorism by the state and clandestine organizations who brutalize and
murder with impunity. How with so much against them do they continue
to resist? It is because they are together. Everyone knows the truth
in Honduras and here is a common saying, “before the coup we were a
people that were sleeping but now we are awake and now there is no
going back.”

As we support the people Honduras it is vital that international
influence and attention continue to shed light on the reality of the
situation. The global community stood in solidarity with the people of
Egypt and north Africa and we must not forget about the struggle of
the Honduran people. It is imperative to provide an international
voice to the denunciations of human rights abuses while supporting the
international commission of truth. We reject the messages of the mass
media and our government in their efforts to say everything is back to
normal and that Honduras is “open for business”

I was given a mandate by the Honduran people to not only share my
experience with my community and but to grow the resistance here at
home. Which is why I am working with three local activists on a
solidarity delegation for the second anniversary of the coup.  One
goal of this delegation is to create a radio documentary that tells
the stories of OFRANE, COPINH and Zacate Grande in the words of the
people. We will be living and working in these three communities to
gain prospective and understanding about the daily life of resistance.
An element that sets our group apart is that one of our delegates has
cerebral palsy and is in a motorized wheelchair. His strength and
dedication to the struggle for social justice offers us an opportunity
to grow in our commitment to each other as well as gaining a unique
prospective to the life of rural communities in resistance. To ensure
the success and full participation of all delegates we need a secure
and reliable vehicle for transportation.
We are asking for our community to come together and support this
radical show of solidarity and resistance. We need your help to
purchase a truck, we cannot do it alone! Just like the people of
Honduras we are looking to our community for support. Please make your
tax deductible contribution to Education Without Boarders to ensure
the success of this revolutionary project.

Thank you for your encouragement and support,
Rachael

No real social change has ever been brought about without a
revolution… revolution is but thought carried into action.
-Emma Goldman 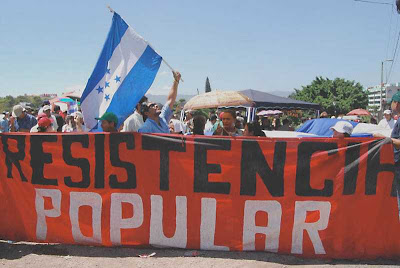