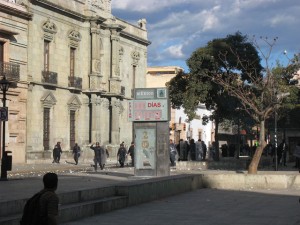 Felipe Calderon came to visit Oaxaca and brought with him more than 150 uniformed federal police. There were snipers stationed on the rooftops of hotels. There were also several army trucks full of either police or military dressed in civilian clothes. Allegedly, after the clashes finished, these individuals set some cars on fire near the second class bus station in an attempt to lure protesters there to be arrested (and of course also to blame the protesters for the act).

Earlier today, as people were gathering for a march called by Section 22 against Calderon’s visit, snipers opened fire on those gathering. Two teachers were hit. One in the butt and another in the head. Two other individuals were hospitalized as a result of taking direct hits from tear gas canisters. One in the head – Marcelino Coache, a prominent APPO member – and another in the chest. All four will reportedly be fine. The march went on and as the police tried to block them from getting into the zocalo, clashes erupted.

People report that the police fired tear gas indiscriminately all over the zocalo, which at the time was full of tourists. At one point, three federal police officers were detained by activists to exchange for those arrested by the police. That plan didn’t work out as the federal police raided the location where the officers were being held, arresting more people. For most of the afternoon, protesters and kops were battling it out on Independencia and in the Alameda. Protesters used rocks and one or two molotovs. Police used rocks, tear gas, and I also saw one throw a molotov at the protesters. A tractor trailer parked in the zocalo was set on fire and burned for at least an hour. After the truck started burning, the police left and people just gathered taking photos. It was reported around 6:30pm that clashes had started up again, presumably after the fire had been put out and the police moved back in.

Section 22 held a press conference at 7pm. Initially it was reported they have called a halt to negotiations with Oaxaca’s new governor, Gabino Cué Monteagudo, as a result of the repression. Now it is unclear. In a gesture to brush this under the rug, Cue has announced that the 14 people arrested today will be released without charges. Four people remain hospitalized. There will be a march leaving from IEEPO at 10am tomorrow morning. The shooting of demonstrators in the head with live fire from snipers – which has passed unmentioned by most of the media – marks a major escalation in the level of repression being deployed against the social movement in Oaxaca.