Dozens of people protested in front of GM’s headquarters in Detroit last week, outraged at the company’s treatment of its Colombian workers. In Bogotá, 2,700 miles away, a small group of Colombian men were touched by their actions. “They’ve changed my perception of what I thought Americans were like,” one of them told me. “They’ve never met us but they’re doing so much for us.” 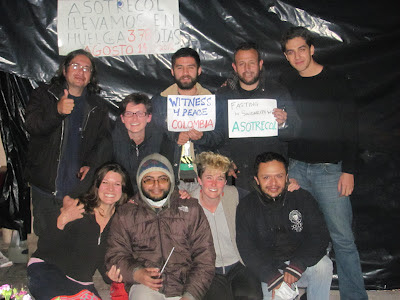 Witness for Peace Colombia Team fasting in solidarity with Asotrecol

I met Jorge my second week in Colombia. I went to meet officials at the U.S. Embassy and immediately noticed a make-shift camp outside the main entrance. Living there are 13 men who belong to the Association of Injured Workers and Ex-Workers of General Motors Colmotores (Asotrecol), and they just commemorated their protest’s anniversary.

A welder at General Motors’ South American subsidiary, Colmotores, Jorge performed manual labor at the plant until he was disabled. He underwent three surgeries and now walks with a cane in his hand and several screws in his spine. GM fired him when he could no longer work due to his workplace injuries, and paid him no medical benefits or severance.

In conversations about Jorge’s case with people in the United States, I sometimes hear that I can’t expect the same standards here that would be applied stateside. The issue in Jorge’s case is that GM didn’t even meet Colombian legal standards. The Ministry of Labor had to review workers’ medical records to ensure they incurred no workplace injuries. The Inspector on some Asotrecol members’ cases was convicted for falsifying records and has a warrant out for his arrest. Colpatria, Jorge’s professional risk insurance provider, was also fined for illegally changing his medical records to reflect “common” rather than “occupational” injuries. Sadly, the falsified records do not get nullified automatically, and cases do not get reversed due to corrupt oversight, so Jorge and others in his situation have not received justice.

After one year without any sign of a resolution from GM, Jorge decided to sew his mouth shut and go on hunger strike until his case is resolved. Minutes before he put six stitches in his lips, Jorgeexplained his rationale to me: “Essentially GM gave us a choice: to die of hunger or to die waiting for them to solve this problem.”

The hardest part of working on Jorge’s case has been fighting for social justice against a U.S. corporation. In every country I’ve lived or traveled, locals have almost always differentiated between the U.S. people’s good nature, U.S. companies’ greed, and the U.S. government’s indifference.

It is sad to have to differentiate between U.S. entities when our ideals and behavior should be based on justice uniformly. Colombians shouldn’t have to react with surprise when people in the States stand up against injustice, even when it’s for someone we’ve never met. GM should be ashamed not just for violating Colombian law, but for not setting a standard that could improve labor conditions in Colombia. The U.S. government, which bailed out GM with $50 billion and remains one of its largest shareholders, should also be ashamed for not holding GM accountable for human rights abuses. Companies and governments are the institutions with the power to make the most noticeable impact abroad, but, in this case, have fallen far short of improving human rights conditions.

I have gone to see Jorge almost every day since he stopped eating. He no longer has the energy or optimism he used to boast, and he is worried GM will let him die before settling his small claim. Across the United States, people are starting to take notice of this case. In over 20 states, they fasted or held protests in solidarity with Jorge and Asotrecol this past Wednesday. They will hold more this Friday, not just in the U.S., but also in Brazil, Canada, and Germany.

As Jorge enters his 4th week on hunger strike, I hope that GM soon corrects its error in this case, and that it one day realizes that it can be a force for positive global change.

Posted On May 5, 2011
Arizona’s attempt to dismantle Tucson’s ethnic studies program was dealt a blow Tuesday when students rose up and took over a school board meeting where a resolution to determine the fate of the program was up for discussion.

Posted On May 11, 2010
3rd Annual Seattle CISPES Solidarity Cycle bike trip. The ride will be a 2-day loop, starting and ending in Seattle.

Mexico’s Bicentennial: The Drug War, NAFTA, the Economy, and the US Role

Posted On September 18, 2010
“millions of Mexicans like me feel skeptical and unenthusiastic about cheering for either our independence or our revolution.”