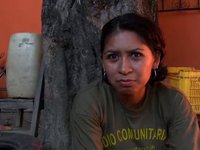 The southern Mexican state of Guerrero in the 1980’s and 90’s saw rising violence and insecurity due to government neglect, and in some cases involvement, and a corrupt judicial system. The problem came to a head in 1995 when state police massacred 39 campesinos at Aguas Blancas.

That same year, a series of regional assemblies were held in the Costa Chica and Montaña area in southeast Guerrero leading to the decision that the communities would start their own police force comprised of volunteers. In 1998, in addition to patrolling and detaining suspected criminals, the communities began their own justice and community reeducation program to deal with offenders. The CRAC (Regional Coordinator of Community Authorities), as this effort was christened, is now comprised of over 60 communities and around 100,000 people, and counts on the assistance of 750 volunteer police from the communities themselves. It acts as a parallel authority to state and local government, dealing with almost all aspects of community life through traditional assemblies and consensus.

In 2009, unbeknownst to the communities in the region, transnational mining companies and their local Mexican partners were securing mining concessions and even exploitation permits to dig out the silver, gold, iron and zinc present in their land. What this constitutes for the communities and the CRAC is a threat to their active project of self-determination and self-defense. The access roads that are to be built, for example,  represent a way for state and federal authorities to, under the banner of development, insinuate themselves into the territory and undermine the autonomy of the communities.

Through a series of assemblies organized by the CRAC in January and February of this year, the people of the Costa-Chica and Montaña region have firmly stated their collective refusal to allow mining operations to take place on their land. This video was produced in order to highlight the work of one of the local community radios to resist the mining project by informing and mobilizing local residents, as well as frame the issue for a number of different audiences.