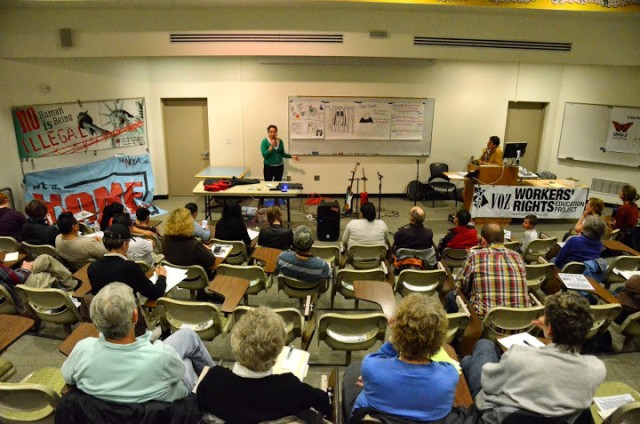 Watershed moments are always interesting. On the one hand, there is great cause for celebration. Raise a glass, take a bow, give a pat on the back–even your own–and revel in your moment. But no such moment is ever an end point. Morning becomes afternoon. Afternoon rolls into evening. Night falls. And tomorrow there is elation’s detritus to sweep away and begin the work anew, albeit building upon firmer ground.

One of those watershed moments came for the immigrant rights movement on April 11 when Judge Janice Stewart of the United States District Court in Oregon ruled that the Clackamas County Sheriff’s Office violated Maria Miranda-Olivares Fourth Amendment rights when it honored an Immigration and Customs Enforcement (ICE) detainer despite lacking probable cause.

In March 2012, Miranda-Olivares was arrested for violating a domestic abuse restraining order and booked into the Clackamas County Jail. The next day the jail received an ICE detainer. That detainer, said Stewart, stated “no basis for the investigation and was not accompanied by an arrest warrant or any other charging document.” About two weeks later, a sheriff’s deputy told Miranda-Olivares that even if she posted bail, she would not be released due to the ICE detainer. Prior to this, jail officials had told her sister the same, four or five times. Her family had been willing to pay the bail, but did not because of law enforcement statements implying Miranda-Olivares would not be released.

Later that month Miranda-Olivares pled guilty to one of the charges and was sentenced to 48 hours in jail with credit for time served and probation. “Consequently,” wrote Stewart, “at about 1:30 pm on March 29, 2012, Miranda-Olivares would have been released from the Jail but for the ICE detainer. Instead, the County held Miranda-Olivares in custody for another 19 hours until about 8:30 am on March 30, 2012, when she was released from the Jail to the custody” of ICE. This, Stewart wrote, was clearly a case in which the government deprived Miranda-Olivares of “life, liberty, or property” and was “clearly arbitrary and unreasonable, having no substantial relation to the public health, safety, morals, or general welfare”. The “county’s detention of Miranda-Olivares,” wrote Stewart, “was not authorized by the Fourth Amendment.”

A fact sheet on the website of the Immigrant Law Group (ILG) regarding Stewart’s decision confirms three important points. The first is that ICE detainers are requests that “do not authorize detention and are not mandatory orders.” Second, if an Oregon sheriff detains a person “solely for an ICE hold,” he may be sued. Third, “Oregon sheriffs violate the US Constitution and Oregon law when they detain a person because of an ICE hold.”

At a recent forum at PCC Cascade discussing the impact of ICE detainers, Nicole Brown of the Center for Intercultural Organizing (CIO) described the momentous decision. “This has national implications,” she told the audience. “People are looking to Oregon. We hope to see a quick unraveling of Secure Communities.” Secure Communities is the program created by the Department of Homeland Security that has torn apart families and communities by encouraging local law agencies to work with ICE in enforcing the country’s unjust immigration laws.  About 80% of those who have been deported through Secure Communities were guilty of crimes similar to traffic violations.  That reality is a far cry from the ICE depiction of immigrants–specifically, those with dark skin–as dangerous rapists, drug dealers, murderers and other types of violent offenders. Now local law enforcement agencies risk being sued should they honor ICE detainer requests.

According to ILG, since Stewart’s decision, 28 of Oregon’s 36 counties have either made public statements or have told community members that they now “do not honor ICE holds as compliant with the 4th Amendment for detention purposes.” 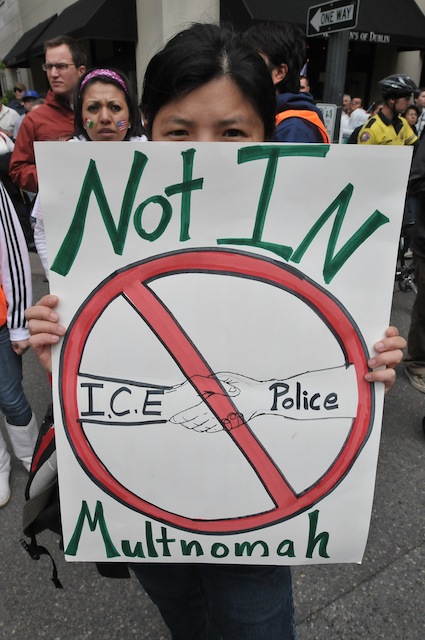 This is certainly a huge victory, but where does the immigrant rights movement go from here? There is the gathering steam of a political solution. In recent days House Republicans like Speaker John Boehner, breaking from the Tea Party wing that seems to control their party, have dared suggest reform beyond the proposed House legislation of a couple of years ago that focused almost exclusively on punishment and border security, although even the weak legislation proposed by the Senate seems off limits. Demographics is destiny, and with over 50 million Latinos residing in the US, both parties are eager to grab the votes of those people, as well as the descendants of this fastest growing population in the country, but they are unwilling to risk the present for the future.

Political solutions do not come out of the sky, granted by those in power like manna from heaven. They come from below with people wresting them from those in power. This point–that Stewart’s decision did not halt deportations, but only stops local law enforcement from honoring ICE detainer requests as they pertain to the Fourth Amendment–was talked about by Romeo Sosa of Voz and the National Day Laborer Organizing Network (NDLON). Voz and the ACT Network have organized immigrants and their allies for the past two years to pressure Multnomah County Sheriff Daniel Staton to stop honoring ICE detainer requests.

They made some headway when a year ago Staton came to an agreement–albeit one he seemed to periodically forget–with the Multnomah County Commissioners to only honor ICE hold requests in the cases of felonies or Class A Misdemeanors according to Oregon law, or when ICE could prove a person without documentation had a criminal history that would make him a public safety threat. While that pressure has resulted in Stewart’s ruling and Staton subsequently saying he would no longer comply with ICE requests–resulting in the lifting of immigration holds for 50 Portland area inmates–the threat of detainment and deportation by ICE remains and must be fought.

Sosa noted how people continue resisting both inside and outside ICE prisons. Recently, inmates at the Tacoma ICE jail went on a hunger strike and three of them continue refusing to eat. That strike has spread to other ICE prisons as well. Outside the gates of ICE jails, people are committing civil disobedience, blocking the paths of busses that deliver people to the prisons and leave to deport them. A group of day laborers has been on a hunger strike outside the White House since April 8, demanding that Obama stop deportations. The action, organized by the NDLON, is a clear reminder to President Obama and the Democrats that the path to holding on to the Senate almost certainly must include the votes of Latinos.

Liliana Luna of the Oregon Dream Activists also reminded the crowd that it was people coming together and forcing their collective will upon the system that resulted in Stewart’s decision and the numerous Oregon sheriffs saying they would no longer honor ICE detainer requests. “Because of all the work that all of you have done, that is why we have this change in policy,” Luna said. “Not because the sheriff was a really noble person and wanted to support the community, and we know that. I have nothing to thank the sheriff for. He is not on our side. They’re not on our side. They might say that they are, but they are scared that we are going to sue them.”

Luna also said that while Stewart’s decision was very good, “it’s not going to protect us from deportation” because ICE can still show up at people’s houses, workplaces, or wherever they are and detain them and potentially deport them. She urged to audience to “keep this fight going and not just settle for this policy,” asking them to recall when in June 2012 Obama authored the Deferred Action for Childhood Arrivals (DACA), many youth without documentation who qualified for DACA took their victory and stopped pressing for greater change. “But,” said Luna, “this is also about my parents.”

Luna was followed by several people in the room who took part in the recent Bring Them Home event at the Otay Mesa Port of Entry along the Mexico-US border in San Diego, California in an effort to reunite families that have been torn apart by deportations. Claire Flanagan of the Portland Central America Solidarity Committee said Bring Them Home was “a direct action response to the crisis of deportation and the crisis of militarized borders…a fight for the right for people to migrate.”

Many of the ICE jails are owned by private corporations, in particular Corrections Corp of America (CCA) and The GEO Group, Inc. In order to increase profits, these companies must keep putting more people in their prisons, and thus they lobby for more and more imprisonable offenses. The victims of CCA and GEO’s profits are most often people of color, including people without documentation detained by ICE. 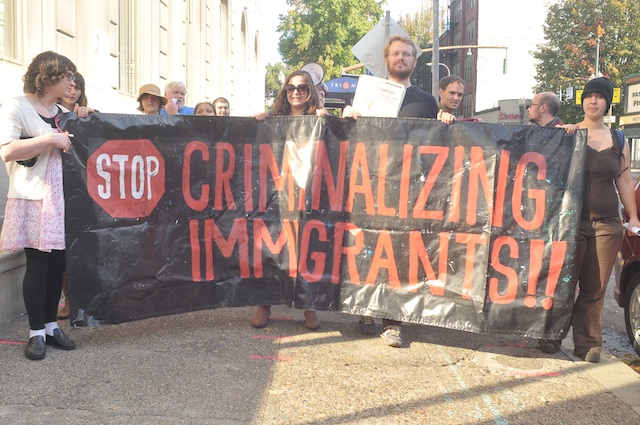 Abigail Singer of Enlace talked about the fight to put an end to the private prison industry. Targeting major investors such as Wells Fargo Bank and community institutions such as churches and governments, Enlace has been urging divestment much as activists did in the fight against Apartheid. In Portland, activists have been pressing the City to move money out of Wells Fargo and screen future investments so that they don’t invest in private prison companies. Singer cited California where half of the UC campuses have passed divestment resolutions.

Scopia Capital, one of the largest institutional investment firms, recently sold over 1.5 million shares of GEO. The company has committed to full divestment, already having sold over half of the 10.6 million shares it owned at the end of 2012. In the last quarter of 2013, DSM North America and Amica Mutual Insurance divested from both companies. The withdrawals of these three companies amounts to nearly $60 million. While that is certainly progress, in 2013 CCA and GEO Group reported revenues of $1.7 and $1.5 billion, respectively. “These campaigns go on for years,” Singer said.

There remains much work to be done in the wake of Judge Stewart’s decision. People who have already been deported from the US need to be reunited with their families. People who are in the United States without documentation still can be detained and deported by ICE, ripped away from their families. And the private prison industry continues to lobby for more stringent laws to fill their jail cells and coffers.

Contrary to what President Obama has said on numerous occasions–and as he has shown through actions such as DACA–he wields great power when it comes to detentions and deportations. He can in fact stop them. Whether he will choose to take action remains a question mark. “If Obama doesn’t do it,” said Mejia, “we’re going to do it ourselves.”

To join the fight against detention and deportations go to: https://www.facebook.com/ORDreamActivist and http://www.pcasc.net/.  For more information on joining the private prison divestment campaign, see: http://prisondivestment.wordpress.com/.